< Back to the The Piper’s Return paintings

I hope these images mean something to you without any “explanation”. If so, you might then like a little bit of extra info, culled from various unreliable sources online.

Populist politicians… charismatic predators…totalitarian dictators … it feels like there are a lot of pipers about. Some hide in plain sight, some peddle fake news to charm us for votes, some infantilize us through raw power.

So the sinister old legend of the Pied Piper feels very contemporary, even if its symbols are timeless. 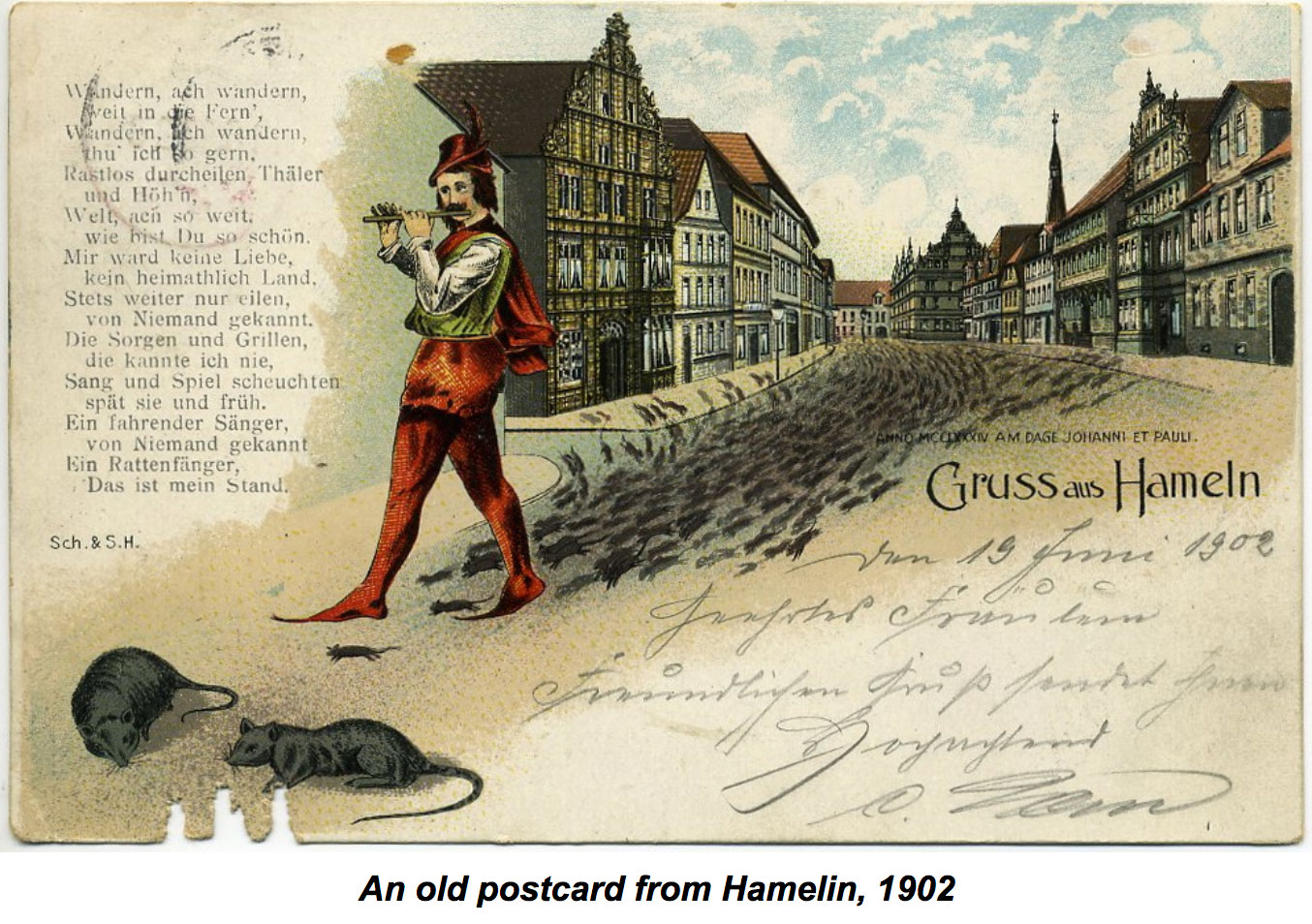 The story originated in medieval times and evolved over the centuries. It was one of the many “fairy tales” written up by the Brothers Grimm early in the nineteenth century. It now runs basically as follows.
It’s summer 1284. Hamelin, a town in central Germany, is afflicted by a deadly plague carried by rats. A stranger arrives dressed in multi-coloured (“pied”) clothes. He is a musician, a piper with magical powers. He offers to get rid of the rats, for a fee. The town’s authorities hire him. He plays to the rats on his pipe and enchants them, leading them out of town to their destruction. So far so good. He’s one of the good guys.

But when the authorities refuse to pay him as agreed, his wrath is absolute and his revenge is cataclysmic. He mesmerises the children of Hamelin by playing to them and leads them off. They follow, dancing happily to their doom. In one version, they all drown in the River Weser that runs through Hamelin. In another, they vanish into a dark cavern in a mountain and are never seen again. In some accounts, three children survive because they can’t follow – one can’t see, one can’t walk and one can’t hear. 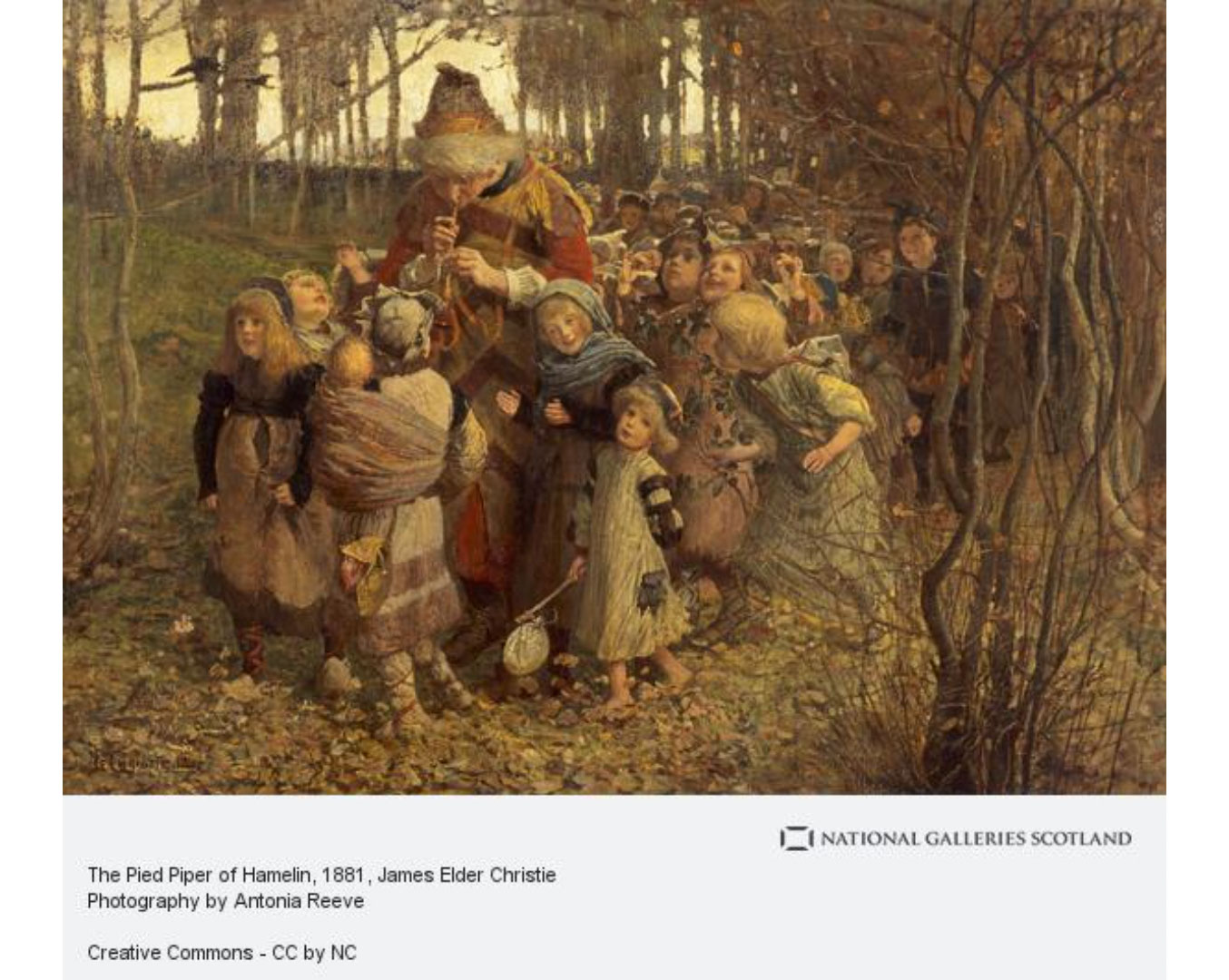 The story may well have originated in an actual event that swept away the children of Hamelin late in the thirteenth century. But what it was, no one knows. There’s just an obscure reference to it in the town’s chronicles of 1384, saying: “It is 100 years since our children left”.

Theories abound about the legend’s meaning. The rats (a later addition to the tale, it seems) relate to the deadly bubonic plagues which black rats were thought to carry and spread. The plague ravaged Europe in successive waves, the most catastrophic being The Black Death around 1347-9. The Piper may be an echo of the medieval figure of Death, with his scythe, as in Bergman’s movie The Seventh Seal.

Perhaps at some point, there was a mass drowning of children or rats, or both.

Or perhaps the story is a folk-memory of the Children’s Crusade around 1212, with its mass hysteria and charismatic leaders: children from Germany and France were said to have set out in their thousands to march to Jerusalem and reclaim the Holy Lands. They ended up dying, drowning or being sold as slaves.

Or, The Piper’s story might relate to mass migration of young people from Hamelin, answering a call from foremen from eastern Europe promising work and riches far away- not so much little children, then, as poor young migrants in search of a life. (Some research suggests that the names of people and towns far to the east of Hamelin corroborates that theory). Or perhaps this tale of a lost generation is about the disastrous trafficking and rent/ sale of children by their poverty-struck families to such seductive foremen from far afield.

It’s also been suggested that The Piper may have been a sexual predator, a prototype of the mass paedophile. A child-abuser and child-trafficker, then?

So, maybe there was a Pied Piper who turned up in Hamelin, a colourful outsider promising the earth and delivering some kind of Armageddon for the young. And maybe not. But the legend lives on as a dark warning. 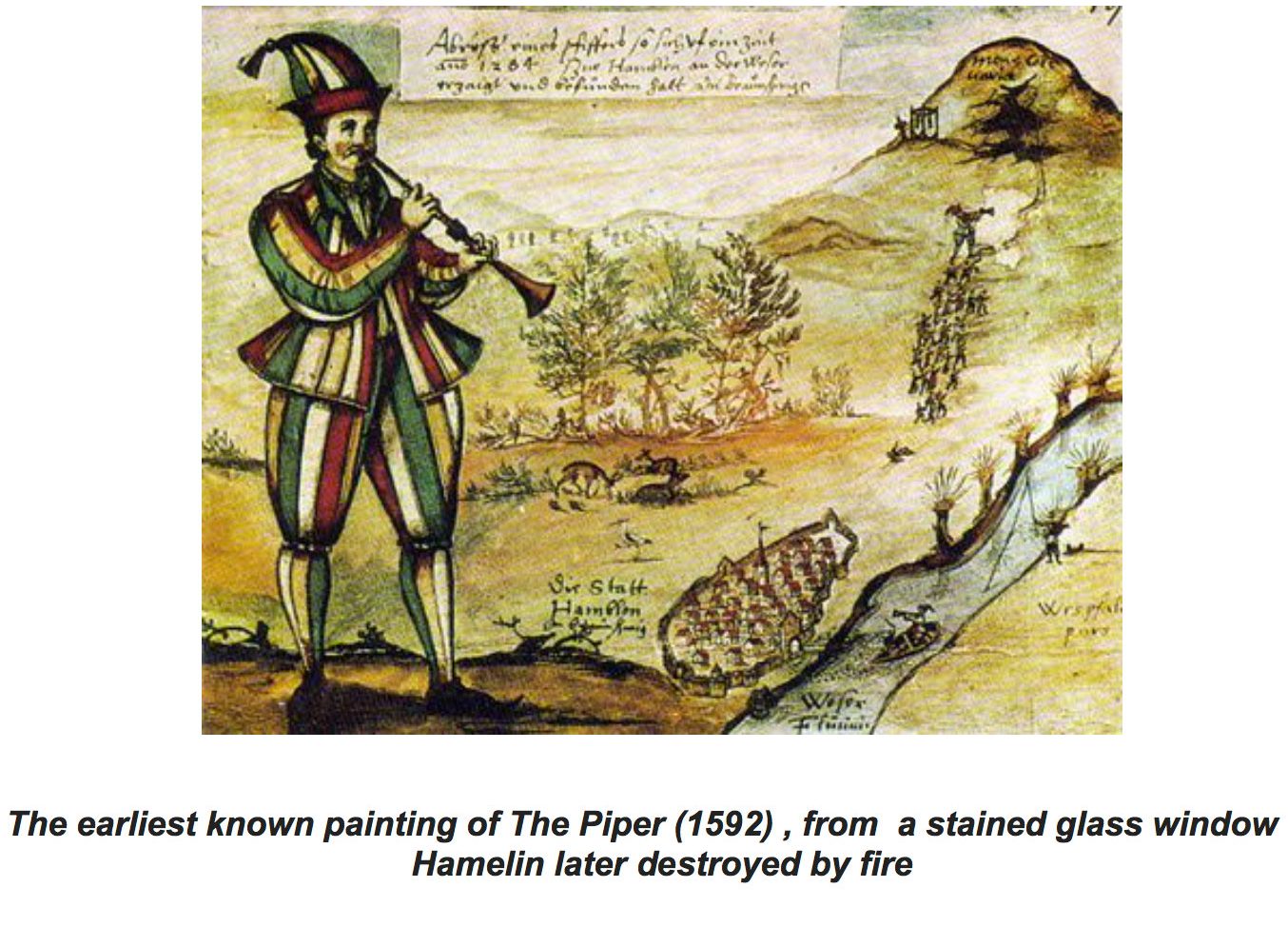 Apart from a stern message for us to pay our dues as promised, the legend has much to say about the abuse of power by demagogic leaders who prey on the young, the innocent and the gullible. Beware of mass charmers.

It also suggests that the Piper’s revenge is powered by a blazing sense of injustice, which he acts on with terrifying disproportion. Certainly this was the case with Adolf Hitler, who orchestrated the brainwashing of a generation of young children and led them to their apocalypse. Hitler was perhaps the ultimate Pied Piper of the 20th Century.

The Nazis dehumanised the Jews and others as “vermin” to be eradicated- see Art Spiegelman’s Maus. It’s a classic tactic, and we are now hearing such language again.

In World War Two Hamelin’s prison was in fact used by the Nazis to imprison, torture and kill political prisoners. Things came full circle after the war, when British Occupation Forces executed Nazi war criminals there. 202 of them were hanged by Albert Pierrepoint, the most famous British hangman of the twentieth century. 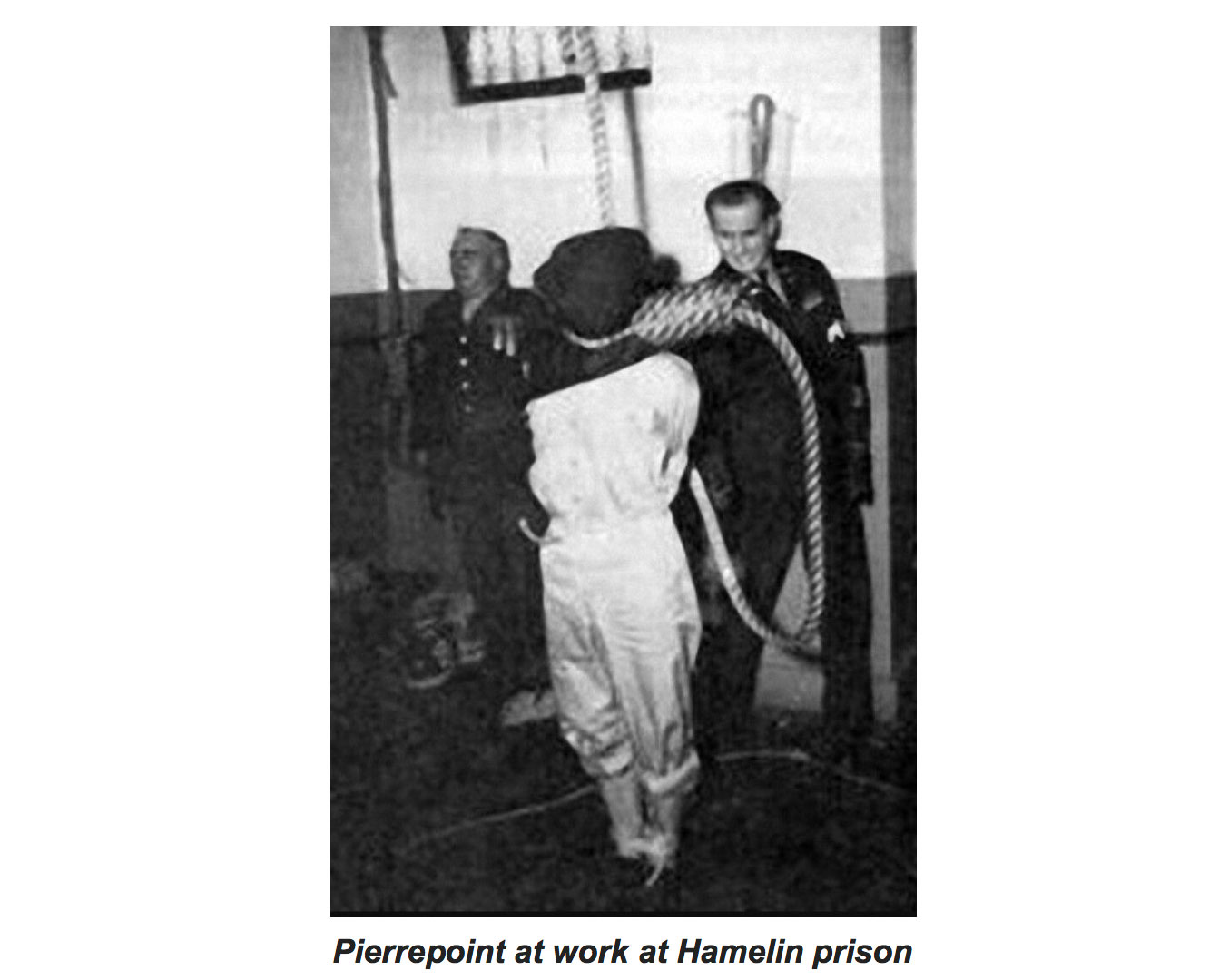 They included the inventor of Cyclon B, the poison gas used at by the Nazis in death camps… and the notorious SS officer, Irma Grese, variously known as “The Hyena of Auschwitz” and “The Blond Beast of Belsen”. Her father was a dairy worker, and her mother had committed suicide. Grese wanted to be a wartime nurse but the SS made her become a camp guard. Ruthless and brutal, she was typical of a generation of young fanatics trained by the Hitler Youth organisation to follow Hitler to his promised land. Accused number 9 in the courtroom, she was only 22 when she was hanged.

Many of these war criminals were buried in the prison grounds, near the River Weser. Later, their remains were reburied elsewhere and the prison was converted into a hotel. You can stay there. There was controversy a few years back when it ran a weekend of fun entertainment during which people dressed as Nazis. There were strong protests but it seems the hotel owners were unapologetic.

My thanks to Avtar & Surinder Bahra for their time, generosity & patience. And to Rossen Daskalov, etching teacher at the Royal Drawing School.
Mark Halliley July 2019

< Back to the The Piper’s Return paintings