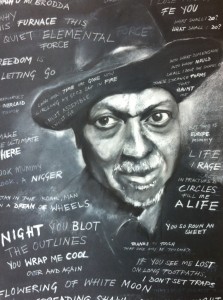 This portrait of the poet the late James Berry was auctioned at a fund-raising event held in his honour.  I was honoured to meet James when making a film with the writer Malorie Blackman. By then he suffered from advanced dementia. He had come to the UK on the boat after the Windrush, to escape the “barefoot” life that was his future in Jamaica. Much of his work focuses on the experience of being black in Britain.  This image of James, based on a photo  taken the day we filmed him back in 2005, appears with fragments from some of his poetry- most especially from the collection FRACTURED CIRCLES.